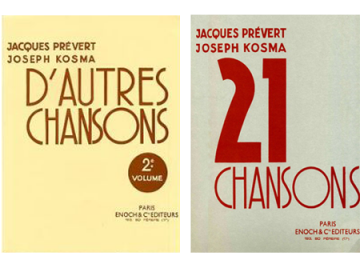 Jacques Prévert was born in a lower middle class family. He made fun of the obsessions and conformity of this social class during his entire life. As a young child, he was fond of books and theatre shows. At the age of 15 he started to work and in 1920, he was incorporated in the army. He spent the years of his military service in Istanbul where he became a good friend of Marcel Duhamel. After returning to Paris in 1922, Prévert settled in a flat which became the headquarters of the surrealist circle including Desnos, Malkine, Aragon, Leiris, Artaud and the leader André Breton.

Prévert was an anarchist. He spent his life arguing the case of victims with a rough but discreet generosity. In 1933, he joigned the “Groupe Octobre” which took part in an Olympiad in Moscou’s theatre. This ideologically motivated performing ensemble won the first prize.

Prévert wrote texts and poetry for a long time, taking part in collective creations. He also mostly Jacques wrote scenari with his younger brother Pierre Prévert.  Together, they created the best poetic texts of the French cinema of the 30’s : Le crime de Monsieur Lange (1935) written for Jean Renoir which displays  the refreshing spirit of his libertarian mind. The musical score was composed by Jean Wiener, except for one song written by a Hugarian composer Joseph Kosma whose name featured for the first time on the screens.

His encounter with the director Marcel Carné was an important step in his carrier. They established a professional partnership which gave birth to a movement in French cinema called ‘poetic realism’. Together, they generated the most startling movies ever made in France : Quai des brumes in 1935 (Port of shadows), Drôle de drame in 1937 (Bizarre, Bizarre), Le jour se lève (1939), Les visiteurs du soir in 1941 (The Devil’s Envoys), a wonderful medieval fable, made during the nazi occupation, Les enfants du paradis in 1944 (Children of paradise), considered as one of the best movie of cinema’s history, and last but not least, Les portes de la nuit in 1946. La bergère et le ramoneur (1953) was also one of their collaboration. This movie was revived by Paul Grimault and gave birth in 1979 to a cartoon called Le roi et l'oiseau.

Banished by the army in 1939, Prévert left Paris in 1940 and established himself in the South of France. Artists like Joseph Kosma, the photographer Trauner and others joined him in order to work on several movies. Kosma and Prévert started to have a very long collaboration as well as a strong friendship. A brace of international hit songs resulted, including Les Feuilles mortes (Autumn Leaves), which was sung in the movie Les Portes de la nuit in 1946, directed by Marcel Carné.

Prévert also wrote beautiful texts for the songs composed by Joseph Kosma. These texts were sung by Marianne Oswald, Cora Vaucaire, Juliette Gréco, les Frères Jacques and Yves Montand. In 1945, Prévert wrote Paroles, published by René Bertelé, Éditions Le point du jour, later republished by Gallimard. This book became the best-selling volume of poetry ever published and was seen as a wonderful and fresh wave after the war.

After World Was II, Prévert came back to Paris. During his entire life, Prévert stayed an antimilitarist and a peace activist.