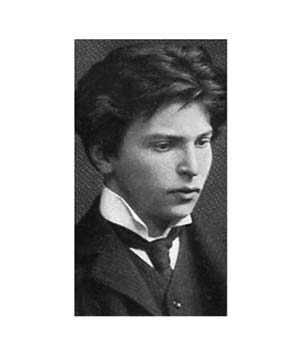 Georges Enesco studied in Vienna where he met Brahms. He took violin classes with Hellmesberger and harmony classes with Fuchs. After his graduation in Austria, he entered the Paris Conservatory and went on studying the violin under Marsick, counterpoint under Gedalge, composition under Massenet and Fauré. A universal musician, endowed with an incredible memory, he remained a virtuoso violinist for his entire life. He was also a conductor, a teacher (Menuhin was his pupil) and he was a good pianist and cello player as well.

His life was shared between Romania, his native land, and France. He played in many chamber orchestras, alongside Cortot, Casals, Lipatti and he founded a quartet in 1904.

Because he was famous around the world for being a wonderful musician, his rendering of the music totally overshadowed his compositions. Today the public is rediscovering his compositions thanks to the famous Rhapsodies roumaines and the sonatas for violin and piano. His sense of counterpoint and his taste for the old music structures are a testimony of his science and of his international culture enriched by a deep affection for Romanian traditional music.

Composed in Paris between 1901 and 1902, these pieces for orchestra are the equivalent of the Hungarian Rhapsodies by Liszt. The first Rhapsody in A Major is the most famous. This work is lively and represents the merry characters of the traditional Romanian songs. The second Rhapsody in D Major is interiorised and contemplative but still sounds very patriotic.