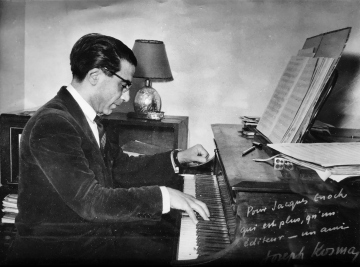 Joseph Kosma was born on October 22, 1905 in Budapest. He started to learn music quite young at the local music conservatories of Budapest, encouraged by a musician grand mother who had been Liszt’s pupil. After studying composition and direction at the Franz Liszt Academy and obtaining a position as assistant conductor at the Opera, he moved to Berlin in 1929 thanks to a scholarship. He lived there for many years before moving to France in 1933. He fled because of his opposition to the Nazi regime in Germany.

In 1935, Kosma met Prévert. This encounter gave him the opportunity to make a living as he started a carrier as a songwriter. In 1937, he collaborated with Jean Renoir for his first movie soundtrack : La Grande Illusion. During the Nazi invasion, he took anonymously part in the making of movies made by Prévert and composed the soundtrack of the movie Les Enfants du Paradis.

After the liberation in 1945, he started to compose songs and ballets mainly for the cinema. His music made his reputation and in particular the ones written in collaboration with the poet Jacques Prévert. Together, they wrote about 80 songs which were very characteristic of the intellectual song of the post-war Saint-Germain-des-Prés. Kosma composed the ballet Le Rendez-vous in which the theme of Autumn Leaves (Les Feuilles mortes) appeared for the first time. This music had a tremendous success and made the composer and the poet famous around the world.

His songs always had a lot of success in the intellectual circles as well as in the popular classes. Kosma took the French nationality in 1948. In 1951 he was awarded the prize for best movie soundtrack at the Cannes Festival for the movie Juliette ou la Clé des songes by Marcel Carné. But in 1952, problems linked to th production of the animated movie La Bergère et le Ramoneur put an end to Kosma and Prévert’s collaboration and deep friendship.

From 1954, he participated once more to a movie soundtrack and made the music for works of Jean Renoir. The bright talent of Kosma was to emphasise the text of Prévert thanks to a simple utilisation of the melodies and the rhythms.

He composed a scenic-oratorio Les Canuts produced in 1959 in Budapest and at the Staatsoper in Berlin. This oratorio was produced in France in 1964 at the Opéra of Lyon. Few weeks after Kosma’s death, Lyon’s Opera produced on October 21st 1969, his opera Les Hussards. This composition showed a deep evolution of Kosma’s style which seemed more elaborated.

Film director Marcel Carné had seen the ballet Le Rendez-vous and had liked it. He asked Prévert and Kosma if they could make a movie based on the story of the ballet, which was accepted by the authors. The soundtrack of the movie Les Portes de la nuit was based on the ballet’s music. In addition to the song Les Enfants qui s’aiment, Carné needed a second song for his movie. He selected the melody of the third scene of the ballet, a melody of four notes repeated four times with a falling interval of a tone. Prévert wrote a text on the existing music. He added a verse and the song Les Feuilles mortes (Autumn Leaves) was born. Extracts of the theme of Autumn Leaves were heard several times in the movie : nobody paid attention to the music.

Cora Vaucaire sung Autumn Leaves on a theatre scene, Jacques Douai recorded it for the first time and Yves Montand included it to his stock pieces without any success. It took three years for the song to become an international hit. In the United States, the song had a tremendous success. Johnny Mercer,  Franck Sinatra’s songwriter, adapted Autumn Leaves and the success was immediate. The American success was soon confirmed worldwide thanks to different versions made by famous jazz musicians and singers. This success, which gave to Autumn Leaves the opportunity to become a standard, continues nowadays.