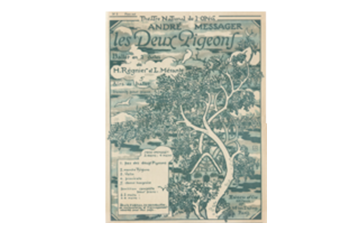 André Messager was not born in a family of musicians. His calling came later, while studying in a Marist Fathers’ institution where he took piano lessons. His parents had him obtain a scholarship which permitted the 16-year-old boy to enter the Niedermeyer school. Messager was taught with Gigout and Saint-Saëns. He left the Niedermeyer school in 1874 in order to become the organist at the Saint-Sulpice church in Paris. But theatres offered more money, therefore Messager accepted to be the conductor and composer of the Folies-Bergère ballet.

In the 1880’s, Messager composed a medley of melodies and became famous. His first popular successes were operettes, a comic opera and his ballet Les deux pigeons. At the same time, Messager published a lot of piano works. While keeping on composing music, he conducted different orchestras and worked as well as a choirmaster. He quickly became director of the Opéra-Comique from 1898 to 1903.

Critics were unanimous in acknowledging his qualities of conductor when he co-headed the Paris Opera from 1908 to 1914.

In 1923, André Messager was appointed chairman of the S.A.C.E.M (the French Society of Music Authors, Composers and Publishers). At the end of his life, Messager did not run a theatre or conduct an orchestra anymore. But he still composed works thanks to a productive diversity.

He promoted the music of important composers who were unknown in France. These composers were from different schools and wrote with different styles. But Messager made them famous by giving them another chance; he gave the public the opportunity to re-discover their music and he contributed to clear up the prejudices against their work.

Based on a Fable by La Fontaine, the ballet Les deux pigeons is divided in two acts and three scenes. This ballet takes place in Romania during the XVIIIth century. The libretto written by Henri Regnier relates the romance of Gourouli and Peppio who are both in love with Djali, a gypsy girl. The opening of the orchestra’s suite, l’Entrée des tziganes, presents a succession of contrasting themes. Classic melodies are the counterpoint of themes inspired by Gypsies’ music and rhythms. The ballet was a great success when it was produced in October 1885. Messager conducted this ballet himself.